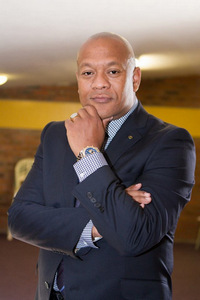 Pastor Petersen was born on the 20th of April 1968 and was dedicated as a baby boy at the Surrey Estate Full Gospel Church. The family then moved to the Steenberg area in Cape Town where they joined the Blessed Hope Full Gospel Church, where he stayed throughout his teenage years and got involved in various ministries such as Sunday school, Bible school, Youth Leadership, Church Council member and Cell group leader.

After many years the call of God grew stronger upon his life and in 1989 he started bible school at Cape Evangelical Institute in Cape Town, now known as Corner Stone Christian College. He completed his B.A Honours in Theology at the University of Western Cape and in October 2010 he was awarded the Doctor of Divinity degree by Team Impact University. Pastor Petersen was accepted into the ministry in 1992. His first church he served at in 1992 was a church affiliated to the Full Gospel Church namely the Tongaat Trinity Tabernacle.

In July 1992 he got married to Nicolette Petersen and out of this union two sons were born namely Jason and Joshua. In 1993 he was called to Tabernacle of Life Full Gospel Church in Rocklands and served there until 2004 when he was called to Shekinah Full Gospel Church in Beacon Valley Mitchells Plain. During his ministry at the age of 31 in 1999 he was elected as the youngest Regional Overseer of the Cape Peninsula Region. He served as the Regional Overseer from 1999 – 2006 and again from 2010 until August 2015 when he was elected as Secretary General of the Full Gospel Church Of God in Southern Africa.

Pastor Petersen has a strong teaching ministry and has graced many local and international conferences speaking on various topics from leadership to marriage enrichment and others. One of the highlights in his ministry was when he received an invitation from the Billy Graham association to be his speaker at Amsterdam 2000 Christian leaders Conference with over 10 000 leaders in attendance. Pastor Petersen had the privilege of speaking at two of these sessions during this conference.

Pastor Petersen leaves Shekinah Full Gospel Church with a membership of over 1600 members after hearing from the Lord to serve in the office as Secretary General.

Website developed and maintained by : Biographix Web and Media